Home › Coaching › Racing. It’s all about the pacing! 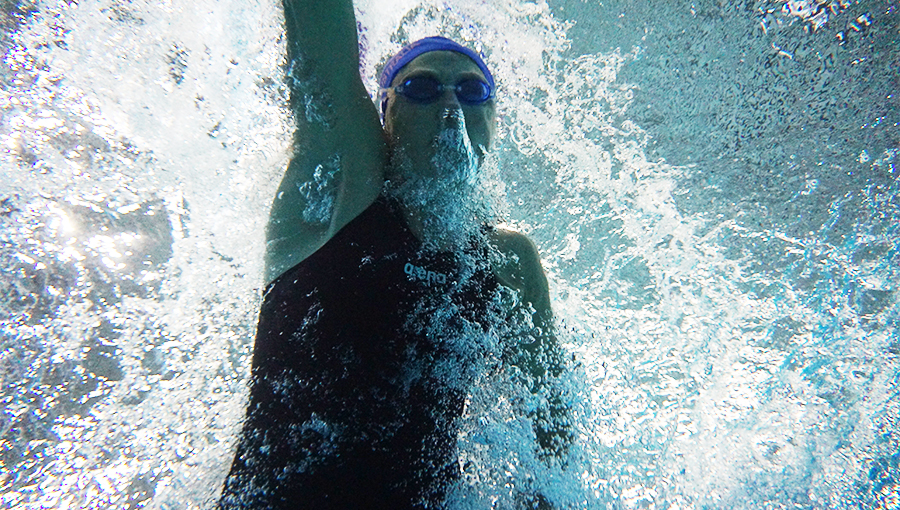 Born to race! Jenny Whiteley is the current FINA World Record holder for the womens 50m freestyle for her age group.
Posted on Tuesday 4th September, 2018

Racing. It’s all about the pacing!

Even in a 50 metre race, for masters swimmers, there is the need for some thought as to how you expend your effort across the whole race. When you get to 100 and 200 metre races – or longer – it becomes even more important.

You spend countless hours training, you spend time and effort on refining your technique, you practice your starts and turns, you eat well and sleep well – and yet you can potentially throw all of this away with incorrect pacing.

What is incorrect pacing?

Well, in almost all situations, it means going out too hard, i.e. expending too much energy in the first lap and/or first half of a race, so that you become so much slower in the latter part of the race.  You might have experienced this yourself at some stage – your stroke falls apart and becomes inefficient, you put your body under stress, and there’s no way you can find the energy to finish hard over the last 20 metres.

Basically, it feels horrible – particularly in butterfly – and physiologically it is not the way to get the optimum performance out of your body. This has been proven again and again both by specialists in the area and by swimmers’ successes and mistakes.

So how do you know what correct pacing is?

There are a number of “rules of thumb” which will help you swim your races at optimal pace for peak performance.

“It never ceases to amaze me that I can do a flat out 50 race in – say – 33 seconds, and yet I can do the first lap of a 100 in 35 seconds going really, really easy.  It just goes to show – you can afford to really take it easy in the first lap – easier than you think you can – and still do a fast time.  Going just a half a second slower in the first lap can mean a lot of energy spared, and a lot more energy available to come home fast and strong”

Real life examples – the Wall of Shame and Pain

So much so, he can even risk his position on a Commonwealth Games team. In the recent Trials, James was favourite to take out the “blue riband” event, as they call it – the 100 metre Freestyle. But he was beaten by lesser known Cameron McEvoy – and here’s why.

To put this in context – James’ time in the individual 50 Freestyle final was 22.02.  However he swam the first lap of a 100 Freestyle – touching with his feet – only 0.74 seconds slower than his flat-out 50. This is too fast for a body to handle, in order for that body to be able to swim an optimal second lap. It might be just milliseconds, but for James it meant a world of difference.

To protect the innocent, and the not-so-innocent, I have concealed the identities of these two swimmers in the fastest heat of last year’s State Masters 200 Breaststroke.  Here are their splits:

Yes, B2 won – he powered past the hapless B1 as his arms and legs refused to work for him and he could no longer breathe.
In fact, B1 did not come back to compete the following day.

B1’s first 50 time – 34.31 – was less than half a second slower than his individual 50 breaststroke time.  No-one’s body will allow their owner to do this in the first lap of a 200 and live to tell the tale.  You cannot deny your body’s physiology; don’t let anyone tell you that you “have to get out there”. You’ll hear TV commentators say this, and it’s never, ever the right thing to do.

I have no doubt that B1 was very, very capable of beating B2 – in fact, if he had paced his race correctly, he may well have swum three or four (or more!) seconds faster than he did.

Instead of swimming 34.31 for his first 50, if he had swum, say 35.5 or 36.0, it would have been incredibly easy… and he would have conserved a huge amount of energy, which would have had a massive impact on the times he swam for his remaining 50s. Not to mention, he would have been able to keep his stroke long and strong, and not shorten up and tighten, like he did.

I could go on about this for pages and pages and give you endless examples, but I hope that gives you enough information to change the way you race – forever!